Good Afternoon, everyone.  As mentioned, I proudly serve as the managing partner of CMM, and just as proudly I serve as member of the board of directors of the HIA LI.

It was six years ago that I was sitting with my partners in this audience when we found out that we were the recipients of the Rookie of the Year Award, and to this day it remains such a proud moment for us, because it represented a recognition by the Long Island community of something we had felt all along, that our entire team was special.  So to all the finalists and winners I, along with my partners and fellow board members, extend our congratulations to you and your entire teams for such a great accomplishment.

The HIA LI is a pretty remarkable place.  While it clearly serves as the leading organization on Long Island for making business connections, many don’t know that it also acts as the watchdog and chief advocate for the Hauppauge Industrial Park, a tiny 11 square mile patch of land located primarily within the town of Smithtown, with a small piece in the town of Islip.  Contained within these 11 square miles are about 1,400 companies, run by some of the most innovative minds in the country. These companies employ about 55,000 employees.  I’d like to share a few remarks with you today about this amazing ecosystem.

My own personal journey to the Hauppauge Industrial Park came as a result of studying Warren Buffet, the greatest investor of all time.  You see, Warren is a strong advocate of “value” investing, whereby you look for companies the market has significantly undervalued- the proverbial “diamonds in the rough” – and you invest in them and hold them for the long haul.  As a young lawyer, I didn’t have much capital to invest, but I did have time, and I reasoned that time, invested correctly, could have the same long-term impact as invested capital. So more than 20 years ago, I took a page from Warren’s playbook and looked for those places here on Long Island that I felt were diamonds in the rough.

The first place I identified was Stony Brook University, my alma mater.  As a student at Stony Brook, I found that it was occupied by some of the brightest people, both faculty and students, that I had ever encountered.  The President of the University at that time was Jack Marburger, a brilliant physicist educated at Stanford, whose vision was to create a top-notch university with a focus on the hard sciences like engineering and math.  And while he clearly accomplished that, and more, from a student’s perspective there was always something missing.  The campus itself was quite frankly a dump, and the university just simply couldn’t seem to ever get enough resources to uncover that diamond it was hiding.  Yet I still felt it had such strong potential, so I stayed connected with Stony Brook and after graduating from law school invested more into it by joining the alumni association board of directors.

And it was right about that time that magic started to happen at Stony Brook, it reached its tipping point—and while I would like to think it was because of me, it wasn’t – the magic started to happen because there was a new president of the University, Shirley Kenny, a fiery woman from Texas who was determined to get the resources, both public and private, Stony Brook needed to get to the next level.  She believed that by investing in the infrastructure of the University, the true genius it contained could be tapped and revealed. Clearly, she was right.  Today Stony Brook is a top 100 academic university worldwide, with award-winning faculty and students who go on to do amazing things; it has a division one sports program whose athletes compete at the highest levels; it has a statewide center of excellence in wireless information technology, 5 or 6 business incubators, a world-class medical facility, and the list goes on and on.

In fact, the story of the growth and accomplishments of Stony Brook is so remarkable that it is impossible to ignore.  And while there are many things that have led to its success, in my opinion the most critical was the tireless advocacy by Dr. Kenny and her cabinet members to our elected officials that if Stony Brook received funds to build its infrastructure, it would excel beyond all expectations.  Yet as you know, our elected officials have many different competing interests, and sometimes it takes a big stick to get their attention- so Stony Brook created that stick in the form of an economic impact study, which demonstrated in dollars, rather than accomplishments, all the economic stimulation that Stony Brook University was generating in the region, and that became the AHA moment.

See, the elected officials weren’t really paying attention to the number of Fulbright scholars or Pulitzer prizes the university was creating, but once we could clearly document and articulate the billions and billions of dollars, and more importantly tax dollars, that Stony Brook was generating and stimulating, then the elected officials had no choice but to take notice and render their support. And now, not coincidentally, Stony Brook students play their football games in the Senator Kenneth LaValle stadium.

So my investment in Stony Brook worked out well.  Which leads me to my second value-based investment, which I made about 10 years ago, in the HIA LI.  To me, the history of these two organizations is very similar, and their growth potentials are aligned. The Hauppauge Industrial Park was formed as an economic hub to foster job growth and innovation- in fact it is the second largest industrial park in the country, the largest being Silicon Valley. As previously mentioned, the businesses in the park employ approximately 55,000 people, which means that 1 out of every 20 people employed on Long Island works in the HIP.

Yet, like Stony Brook was 30 years ago, the HIA finds itself struggling to garner necessary resources to upgrade the infrastructure in the park. We also find it difficult to get the attention of our elected officials, who are needed to help us tackle critical issues like workforce housing, transit service, or shuttle service to the rail stations.  Without these critical needs met, this Industrial Park will not be able to meet its full potential and truly compete with Silicon Valley, or even worse may perish into a ghost town, shut down by a high tax burden, wages too high to remain competitive, and a non-existent workforce.

Our mission at the HIA LI is do everything we can to help ensure that the park remains a thriving economic engine.  To that end, we have taken a play from Stony Brook, and led by our own fiery woman, Terri Alessi-Miceli, we commissioned an economic impact study to demonstrate the economic impact the park has on Long Island and the region.  So we conducted a comprehensive study, and the results were staggering. Here is a summary:

These numbers make it clear that the economic impact of the industrial park is vital and critical to the Long Island economy, yet we continue to receive little to no help or support from our elected officials.  Over the last 10 years, only the county, which receives the lowest percentage of tax revenue from the park, has supported some infrastructure initiatives like sewers and wi-fi. Yet on the Town and State levels, which receive the largest amount of tax revenue from the businesses in the park, improvements to the HIP have been completely absent from capital budgets. Perhaps it is because they are uninformed about all the wonderful things that come out of this park, or even worse, perhaps they are simply uninterested.

That all changes today. Armed with these economic findings we at the HIA LI will use this as our stick to make sure that all our elected officials are educated on this and receive our message loud and clear—that we all love Long Island, that the HIP is a critical part of the Long Island economy, and we will no longer sit back and wait but will expect and demand a seat at the table when budgets for infrastructure spending are being considered.  To not do so is not just at the peril of an election, but quite clearly is at the peril of our beloved island. And that is simply unacceptable.

So again I wish to congratulate all of the businesses represented here, and ask you all to help us bring recognition to this park and the success stories it continues to produce, by helping spread the word of this amazing economic machine. 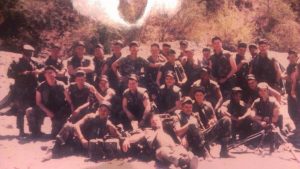 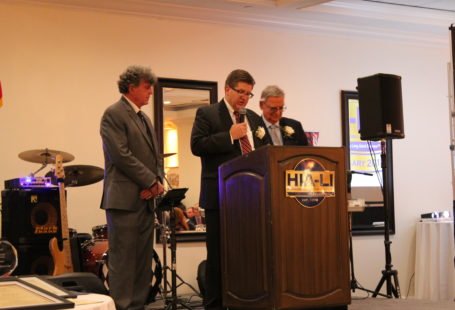 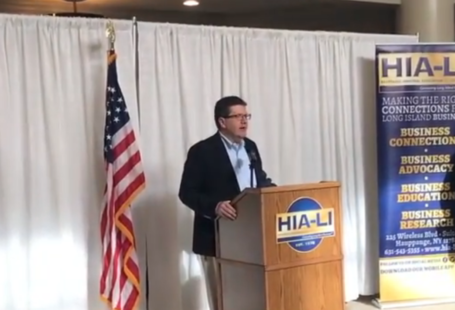